Tuesday was also a fun day (although we spent the afternoon apart).  After school, Melissa went with friends to lunch and then to a public pool (which was very large, with multiple diving boards) and had a lot of fun.  I decided to go the Museo Nazionale del Bargello which is not too far from school and our apartment and which houses some of Michelangelo's earlier works (as well of those of his students), in addition to work by Donatello (but no other Ninja Turtles, Danny).   It is a beautiful museum which once housed barracks and then a prison (and was built in the 13th century).  I then went to one of my favorite panini places to grab a sandwich and returned home, hung some laundry on the line and went to the grocery store.  After Melissa got home, we got ready to go to see La Boheme (my favorite opera) at St. Mark's Anglican Church on the south bank of the Arno.  Although it was an amateur performance before a small audience of about 150 people, and not the full opera, it was surprisingly good.  The four characters all had really beautiful voices and were accompanied only by a piano.  During the intermission, they served Prosecco and we all spilled out into the street and drank our wine while waiting for the second act to begin.  Both Melissa and I really enjoyed the performance and were so glad that we went. We had a quick bite to eat at a forgettable restaurant and returned home exhausted, once again. 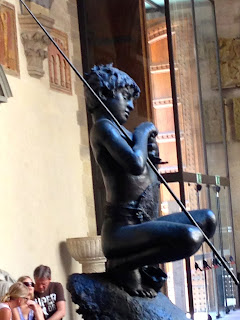 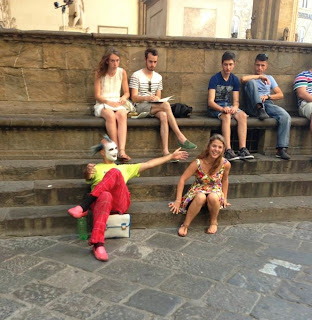 Posted by Angela and Melissa at 7:56 AM